Have you ever taken the citizenship test that immigrants have to pass in order to become a naturalized American? It's hard. Many of the questions stumped me, which shouldn't be surprising because the privilege of being American was given to me arbitrarily by the Constitution. I learned most of what I know about government from watching The West Wing and I still have gaps in understanding. This nagging notion fed into my expanding project involving Senator Kip Tunamelt (D-FL) and ultimately formed the premise of Let's Write A Bill!

I forced every-day citizens to participate in a legislative project. The Department of Trust, in order to form a stronger bond with the public, tasked Senator Kip Tunamelt to write a bill with the help of the people of Philadelphia. He would have to teach the onlookers about the difference between an act and resolution, how it's written, and how to get it passed. This farcical political exercise made the visitors to feel like the "we" in "we the people". 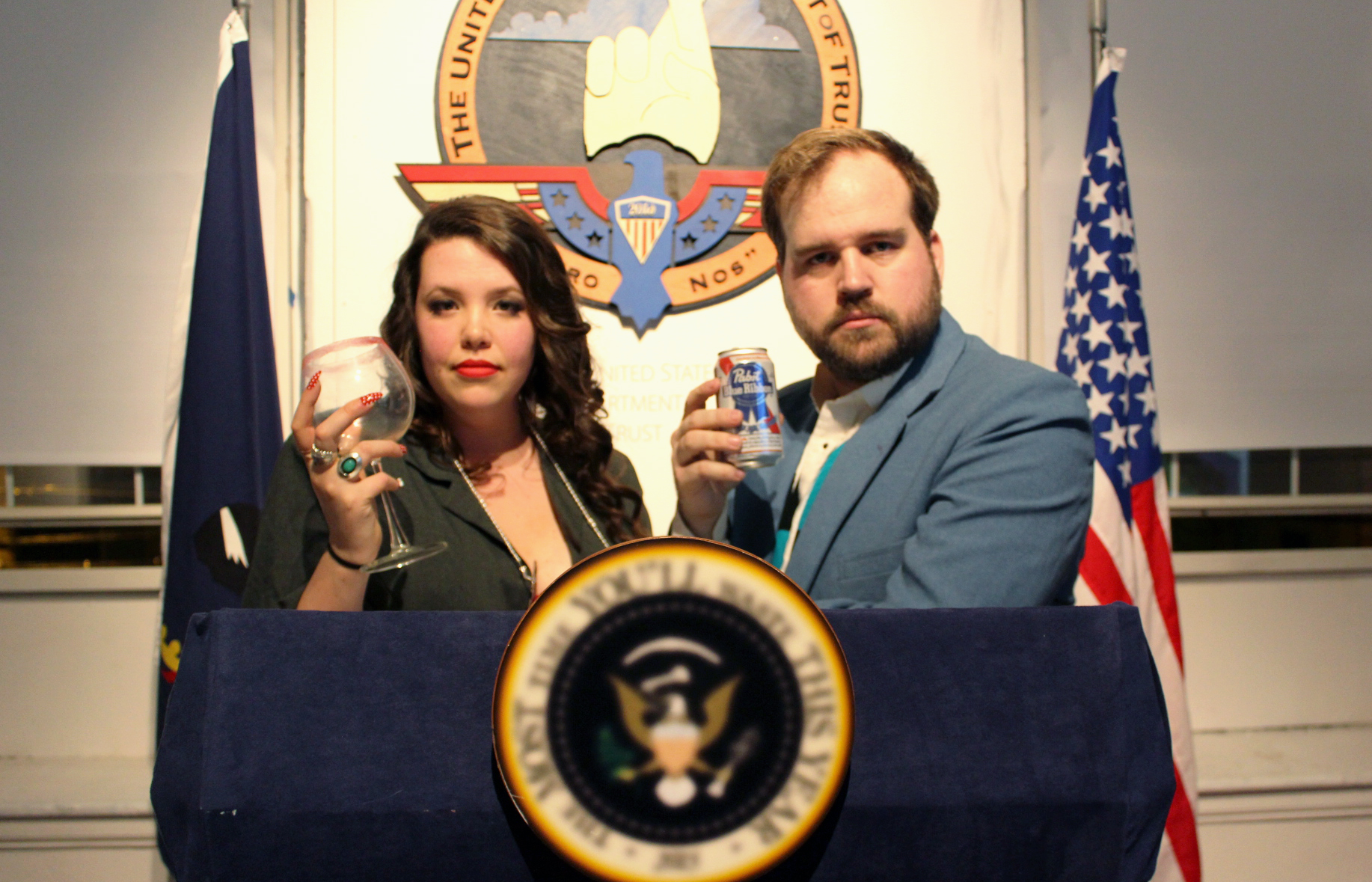 The evening began with sweeping patriotic music blaring from desktop speakers hooked to a laptop. Next to this office setting was a printer, paper stacked, ready to go. Passers by poked their heads in, curious about the federal decorations and bombastic characters.

"Y'all, we're gonna have a show that involves you 'round 8 O'clock, come back alright? There's free beer!" chants Senator Kip Tunamelt of Florida. His personal aid Terri watched from behind the desk as she fixed her makeup.

Citizens came and went, some stayed and chatted with the Senator, asking him what all of this was. He excitedly explained it to a group of his constituents, "Y'all the Department of Trust has sent me up here to make sure y'know how to write a bill. That's important cause I'm not sure me and my colleagues even know how!" The group laughed uncomfortably. The Senator ramped up the energy, and geared up the sleepy visitors for a night they would never forget. 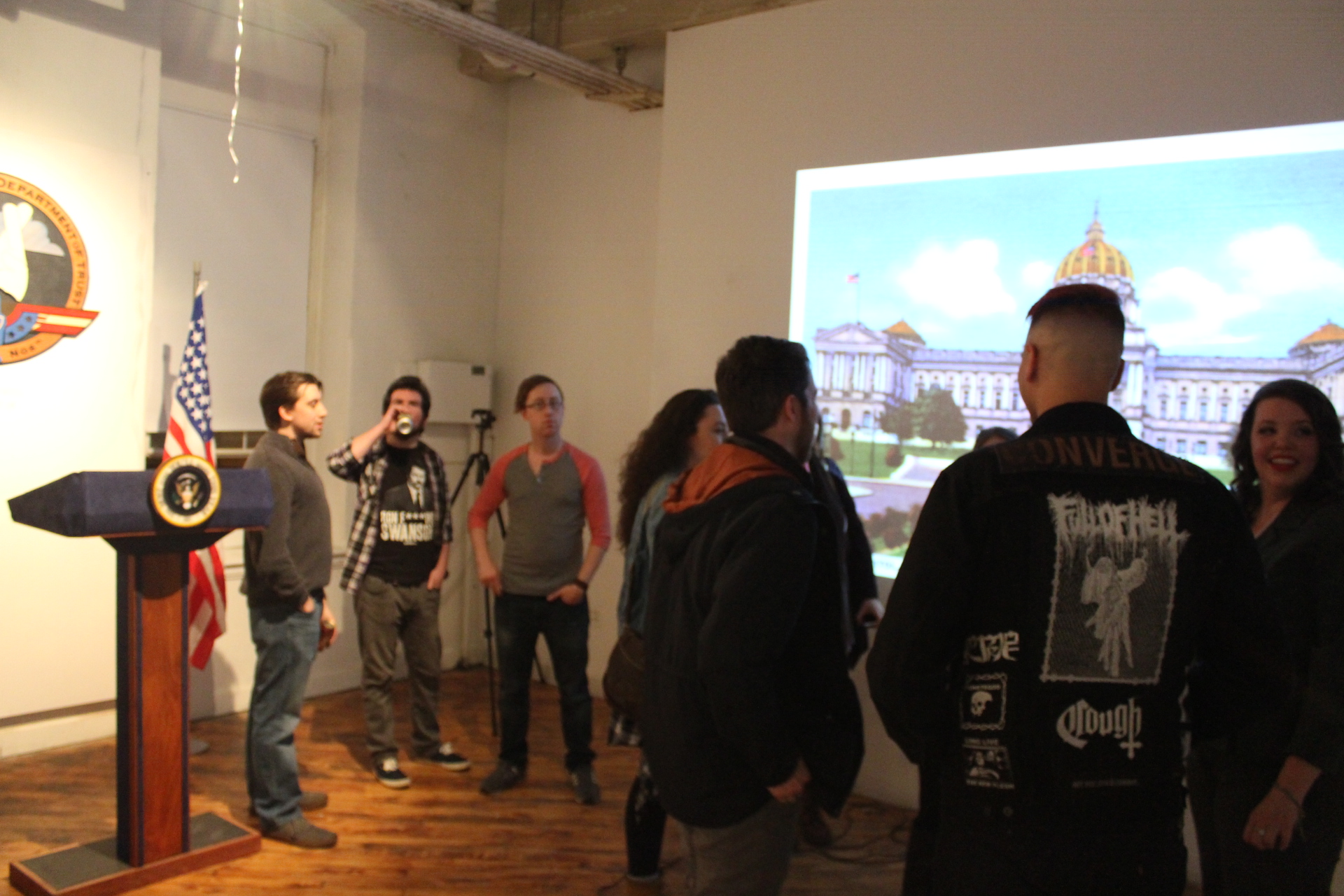 The crowd gathered, the Senator asked them to get comfortable and they all sat on the ground. Senator Tunamelt opened a beer with his front teeth and kept reminding the people that the beer is free. Several more citizens joined and cracked open an ice cold PBR.

The Senator began, introducing The Department of Trust, his eccentric personal secretary Terri, and the generous venue of Practice Gallery. He then launched into the exercise, asking if anyone knew the difference between an Act and a Resolution. No hand raised.

The Senator explained the difference, and said it is the most important decision because it determines how effective the bill is. After the lesson, the crowd agreed on an Act. 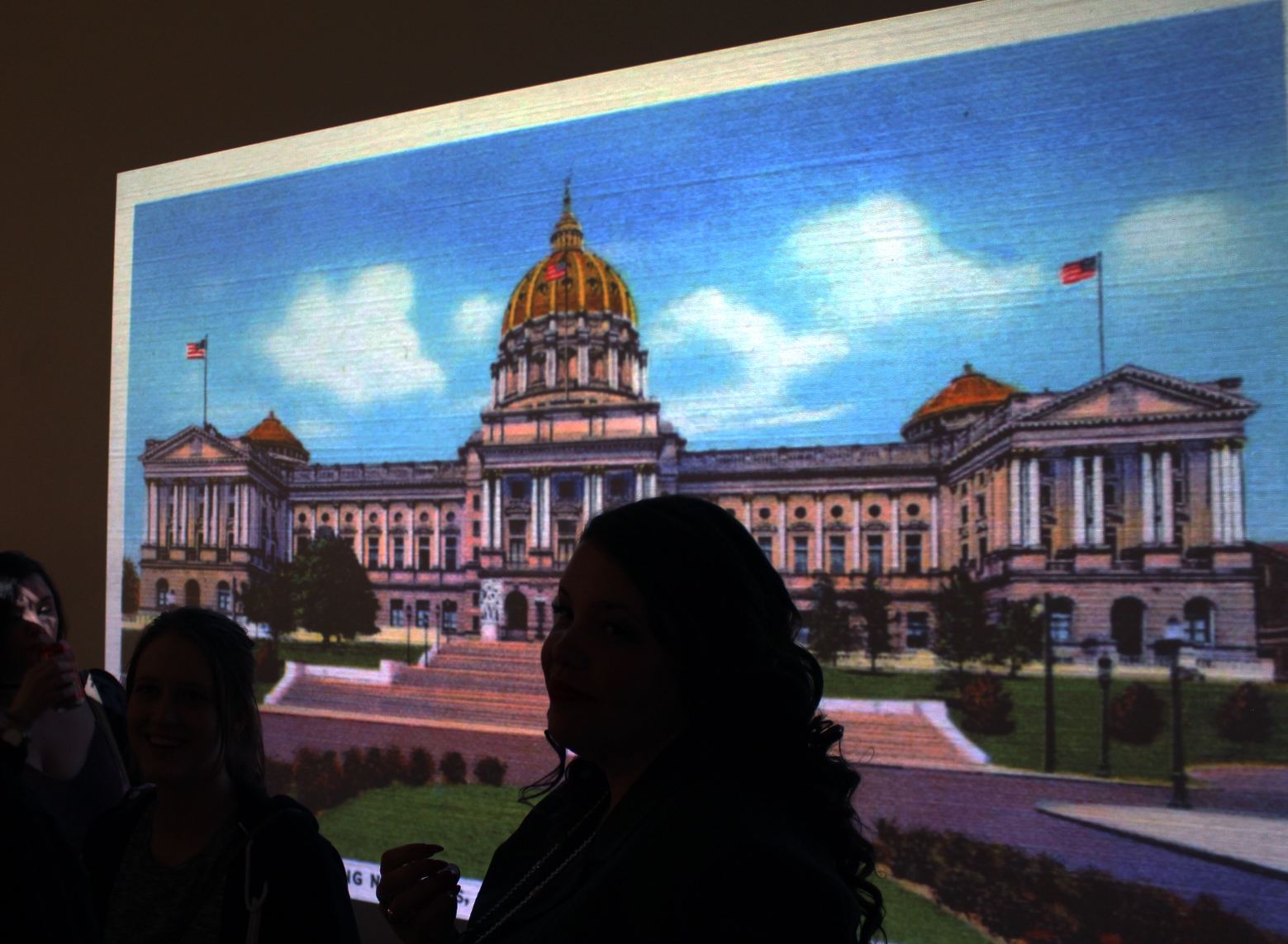 The next step was to decide what this bill would do. The visitors voted to write a bill demanding that The United States, in any part, must get to Mars by the year 2020. A lofty goal to be sure, but the Senator-turned-Emcee guided them through the process of making the bill an Act.

He deputized four volunteers into the United States Congress, two would act as sponsors for The House of Representatives and two as sponsors for the Senate. They were key to passing the bill and preparing it for Governor Tom Wolf's signature. He was brought in on teleconference and dispatched his support. With his signature, the bill became an Act, and that Act became a law. 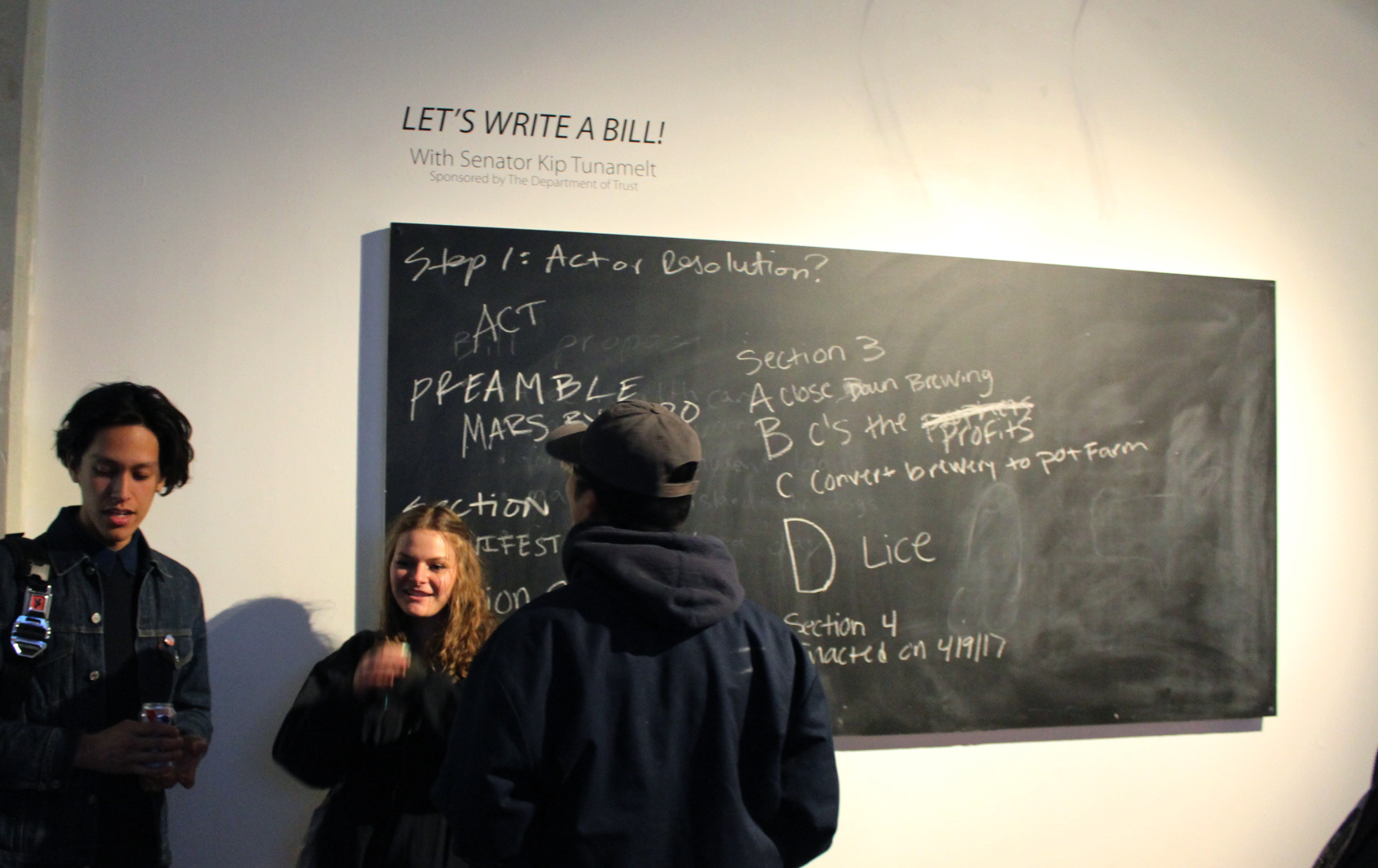 The Senator mentioned, after at least seven beers, that he doesn't think we could get to Mars by 2020. "I mean, I get it... the Earth is dying and Trump is President, let's leave and populate Mars. Guess what, Mars is far away, and IF we got there, it'd be meaner to us than a changing climate." He was excited by the engagement he witnessed of the Philadelphians and expressed his interest in doing another Let's Write A Bill meeting. He wants to educate the every-day person, the bread and butter of the lower and middle class, the ones whom are effected by legislation the most.

"What the people don't know is that they are a lot closer to making legislation than they think. Y'all believe it's some magical thing that happens and it's impossible to understand. Ain't the case, them three words 'We the People' is you and me, if you and me don't care, there ain't no 'we'." 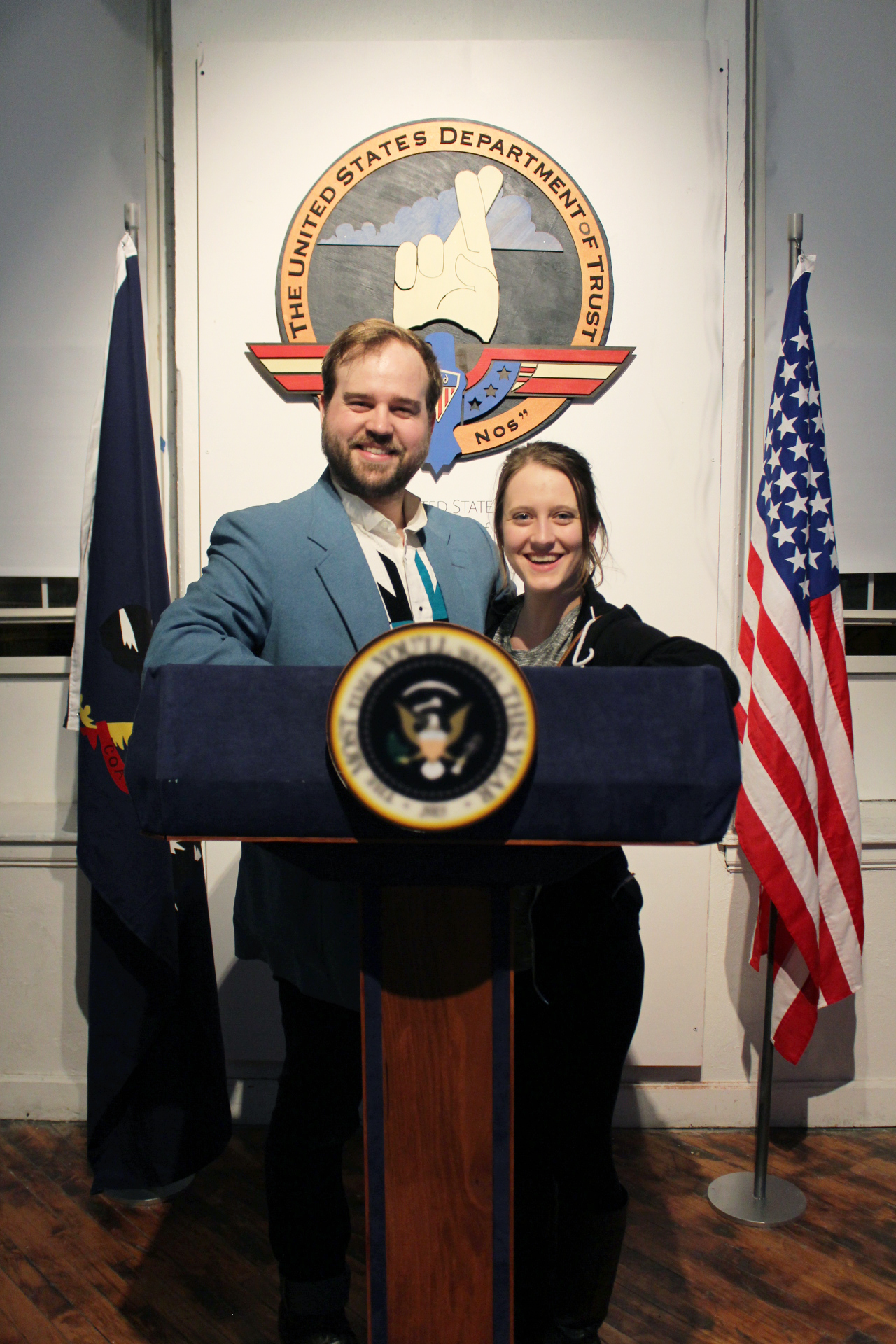 It was clear by the end of the night, after the bill writing, the bill signing, the press conference, that the Senator is a big supporter of us, the People. He believes in Vox Populi Vox, or the voice of the people is the voice.

His constituents lingered and shared more beers after the event, and the Senator talked to them about the experience. Late-comers to the bill writing looked puzzled as they walked into the space, which reeked of PBR, body odor, and patriotism. He went up to them, one-by-one and proudly explained what the group had done just minutes before

The visitors to Practice Gallery after the opening night will experience a different environment: there wont be a rowdy populace, the make-shift office is cleared away, and there is a wall-sized projection playing a video of the Let's Write A Bill Town Hall proceedings. No free beer, nor the Senator's obnoxious speech.

On the podium, the bill is typed on a single sheet of paper, beer stains and myriad signatures mark the page. It is a testament to the power of you and me, of we.

SIGNED INTO LAW BY THE PEOPLE OF PHILADELPHIA

WHEREAS, In order to sustain our growth as an infectious species,
and to curb the deterioration of Earth itself.

BE IT ENACTED BY THE 38th GENERAL ASSEMBLY OF THE COMMONWEALTH OF PENNSYLVANIA STATE LEGISLATURE:

SIGNED BY THE SURROGATES OF EACH HOUSE IN THE PENNSYLVANIA COMMONWEALTH LEGISLATURE, AND WITH THE SIGNATURE OF SUPPORT OF GOVERNOR TOM WOLF, THE BILL IS PASSED INTO LAW.