With most of my world-building, I need a strong historical foundation on which to anchor my virtual realities. Deep Feel (1974) is the conceptual backbone to the Metroscope2000® story and structural narrative. While working on the sculpture for Metroscope2000® Kids! I was wondering where the device and its science came from. Slowly and methodically, Giddeon Golconda revealed himself to me, and through him I access the world of the original Retroscop2000, the "Maginificent Hindsight Device".

Golconda is a scientific genius who follows closely to the lifestyle of Richard Feynman, a friend whom he greatly admires. It was Feynman who inspired Golconda to work for the Department of Defense during the Cold War, and never to give up the dream of being a better man. His old fashioned ways may date him, but Golconda is a timeless character who never backs down from his principles. 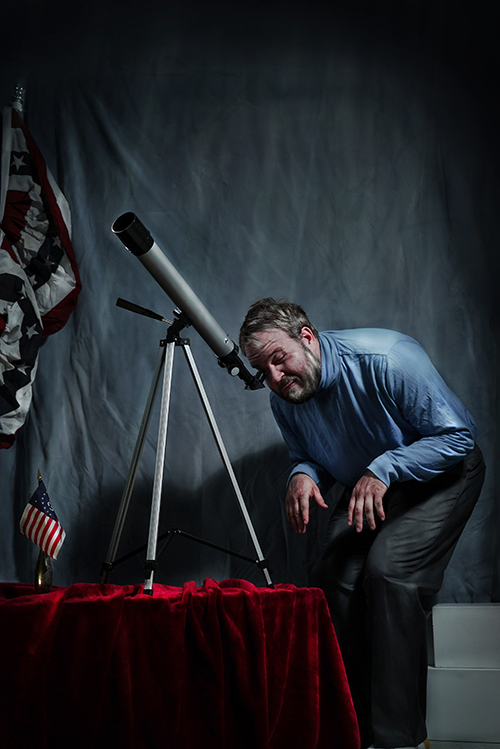 Deep Feel, (1974) is a documentary about the Retroscope20000®, the world's first omniscient telescope and predecessor to the Metroscope2000®. It was inducted into the Criterion Collection in 2001 and is available on their site in DVD and Bluray formats. Documentarian Richard Glött interviews inventor Giddeon Golconda at his home to explore the intricate, if wasted, nature of the Retroscope2000®. The documentary sets the stage and builds the historical background of the project, once a device for Eisenhower, now a mere children's toy.

Giddeon Golconda was born in Muscogee, Oklahoma in 1932. He graduated from Harvard in 1943 and was immediately hired to work on the Manhattan Project at Los Alamos in the computational division. His experience working with John Von Neumann on shockwave analysis inspired him to study physics with Richard Feynman and astronomy with Edwin Hubble, leading him into his mid-career of telescopy at MIT. In 1958, he was hired by President Eisenhower's Department of Defense to develop spy technology that can locate and eliminate USSR weapons sites. Golconda's conscience got the better of him and he instead invented an omniscient telescope that could look backwards in time, needless to say Eisenhower was not pleased and Golconda was fired and black-listed in 1959 before President Kennedy could take office.

In Deep Feel, Golconda touches on themes of history, regret, and seizing life as it comes. His attitude has bittered over the years, but his child-like wonder is in tact, allowing him to pursue his new career dream: Young Adult Fiction. He hopes to write for a new generation of leaders and thinkers, using the lessons of the past to inform the decisions of the future.

Giddeon Golconda is a genius, one whose name belongs scrawled into marble on the proscenium of every science academy in the world. His work on various machines during the Second World War far surpasses the shortsighted machinations of atom-splitting that kept in constant toil such thinkers as Wheeler, Feynman, and Fermi. In fact, Feynman would become a close friend of Golconda's in their later years before Richard's untimely death in 1988. Feynman said of his friend "There won't be a mind quite like Giddeon's when he's gone, so the world should wise up and appreciate it while it's here." The two compliment each other in such ways through their various books and form a brotherhood of the pen, perfectly bound and forever preserved.

That friendship would frame the importance of Golconda after a tumultuous time working for the United States Government and various Administrations, after ultimately giving up his work in the 1970s to focus on private-sector telescopy. The patents to the Retroscope2000® belong to the Federal Government, so Golconda pivoted to work on the Metroscope2000® in his studio in Palo Alto. He claimed that it was his way to give back to a country he felt had betrayed him, and snap every waking person out of the "atomic stupor" that had gripped his or her attention for the entirety of the cold war. In 1992, Republitex™ bought his company and the patents to the Metroscope2000®, putting focus on it as a marketable novelty rather than the device of undeniable truths Golconda intended it to be. Since then, he has sunk deep into his personal tinkering at his ranch outside of Silicon Valley, and occasionally consults with Venture Capitalists.

It is important for me to state that I am a personal fan of Golconda's and believe his work is far overlooked as a means of coming to terms with our histories, privileges, biases, prejudices, and mythologies that we adopt and entrench as life consistently reshapes us in its own image. I chose this eloquent excerpt from his book One Day At A Time as it encapsulates the many facets of this giant thinker: his childlike curiosity, his frustration with education, his wonder at life’s ineffable surprises, and his ability to communicate complex scientific concepts to people like you and me. Golconda is a champion of thinking through the problem and working to come out of it a better person in a better world.