I devised The New Departments project as a way to enter the fray of ideological discourse in America under the Trump Administration. Never have I seen such open, ignorant, and emotion-driven beliefs debated on a national scale. I was a strong opponent to George W. Bush's Administration and the overarching NeoCon agenda, but this beast is wholly new. The Trump Administration has made mainstream the dormant hatred and bigotry of the last twenty years. With a leader so eager to display his incompetence and meanness America has been given a blank check on irresponsible behavior.

I created four new government departments to serve at the please of the President, The Department of Trust, The Threat Department, The Department of Exclusion, and The Department of Masculine Security. Each one is a progression of Donald Trump's Id and is a metaphor for his unchecked and unchallenged demagoguery. I reference that step-by-step progression (not only of his personality but of the subtle steps of a coup d'états) by the primary shapes in each emblem, a circle, a triangle, a square, and a pentagon.

I worry sometimes about how my technique might perform out-of-context, say if someone were to find the postcard for The Department of Exclusion by itself, would it not serve alone as a promotion for such an antithetical government division? However, I find that I'm most challenged when I am faced with an idea out of its context, it forces me to reject it until I'm able to do my due diligence in researching it. I have to expect the same of my fellow countryfolk. In the post-fact world of fake news and deliberate deception, I play a risky game, however, being an American is a responsibility before it is a right, and each of us must rise to it. 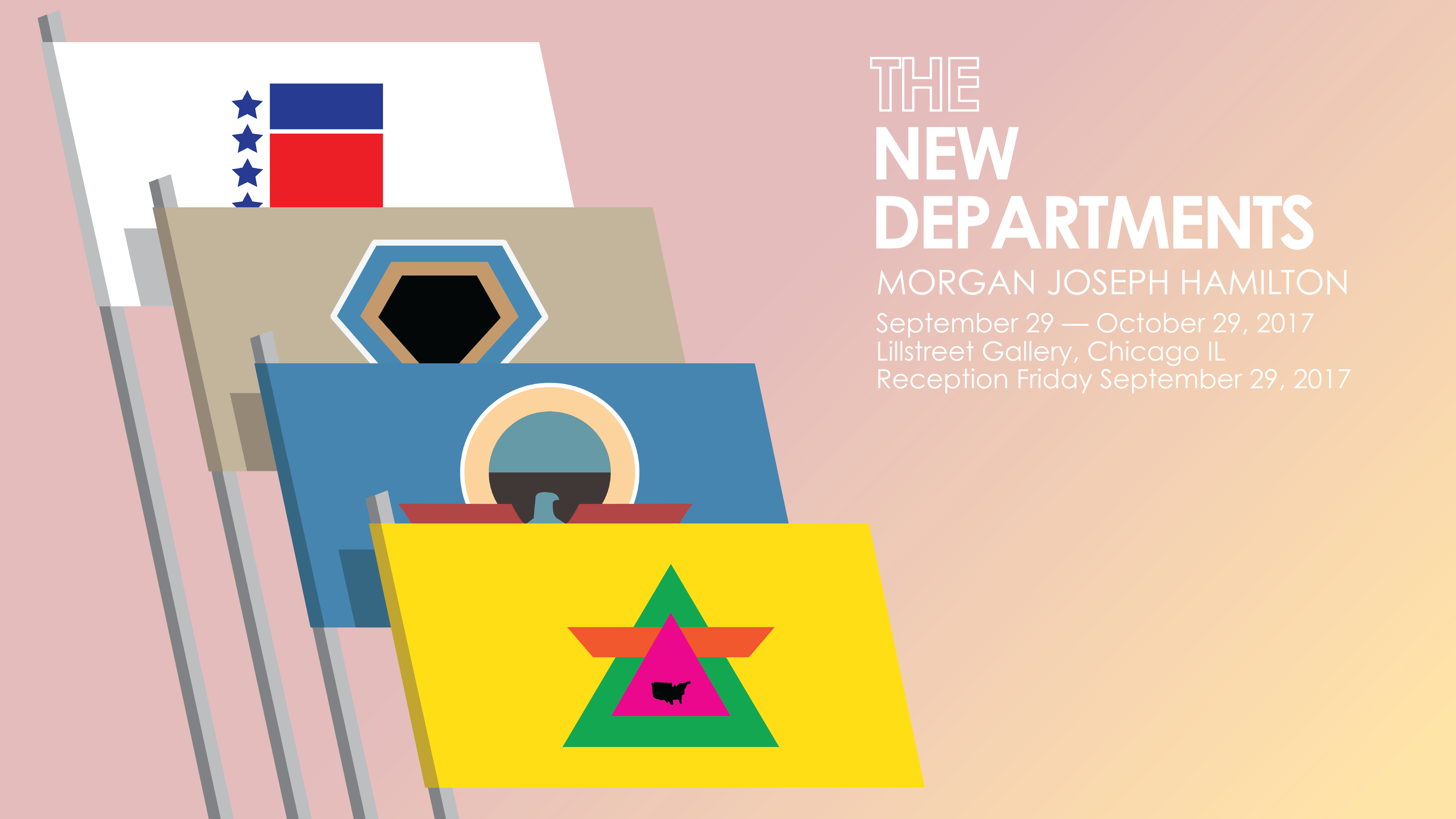 These flags were created with law and order in mind, they fly high above the heads of Chicagoans, and they remind us all of what can be accomplished in a Trump-centric America. Pride and patriotism have been stitched into every detail of The New Departments flag exhibition. Much like President Trump himself, many will enjoy these flags, many will hate these flags, but the vast majority with ignore these flags and allow them to penetrate American Identity.

"These new departments are going to be tremendously helpful in helping, you know not only me but all of you, helping me use my power for good. I've got people all over this, it's going to be a good thing-and another thing, it's going to work for YOU. What a tremendous crowd, you people."

— President Trump on the announcement of The New Departments

THE DEPARTMENT OF TRUST

The United States Department of Trust was originally conceived in late 2016 under The Obama Administration as a way to win over Clinton-averse voters, however Clinton did not win the election to the country's chagrin. It was officially created by an Act of Congress on April 1, 2017 by direct order of President Donald Trump. The young GOP supermajority of government was eager to please their Commander-In-Chief, and put forth his agenda for more "representative" cabinets for his Administration.

The symbol was created for the department by Jamaican designer Belmonpan, he stated that it was a 'quid pro quo' situation, and he didn't necessarily have a choice. The Department Chair Sean Spicer indicated that Belmonpan had a sister in custody over possession, and she might "find her way out" if the artist complies. She is safely in Kingston with her family.

The symbolism is rich in Belmonpan's design, it uses the ubiquitous circular seal that you may find on many government logos, in the gold band is written "The United States Department of Trust, Spero Nos". The Latin inscription reads "Trust Us". Flanking the bottom quarter of the golden ring is an American Eagle that looks to its sinister shoulder. The wings are made from six 'flight feathers' and six stars, these combined with the body reference the thirteen original colonies. The shield on the Eagle's chest denotes the year of the department's creation, 2016. Critics of the department have stated that the eagle resembles the Reichsadler of Nazi origin, Belmonpan made no comment, fueling the controversy. The background has a blue sky with a cloud that also resembles the state of Virginia because the offices are located in Langley. The dominant feature of the seal is a left hand with its index and middle fingers crossed, many have speculated as to whether it means it's telling a lie, or hoping for the best.

The department has had many issues and problems due to its controversial Senate liaison, Senator Kip Tunamelt (D-FL). Read more about his relationship with The Trust Department here. 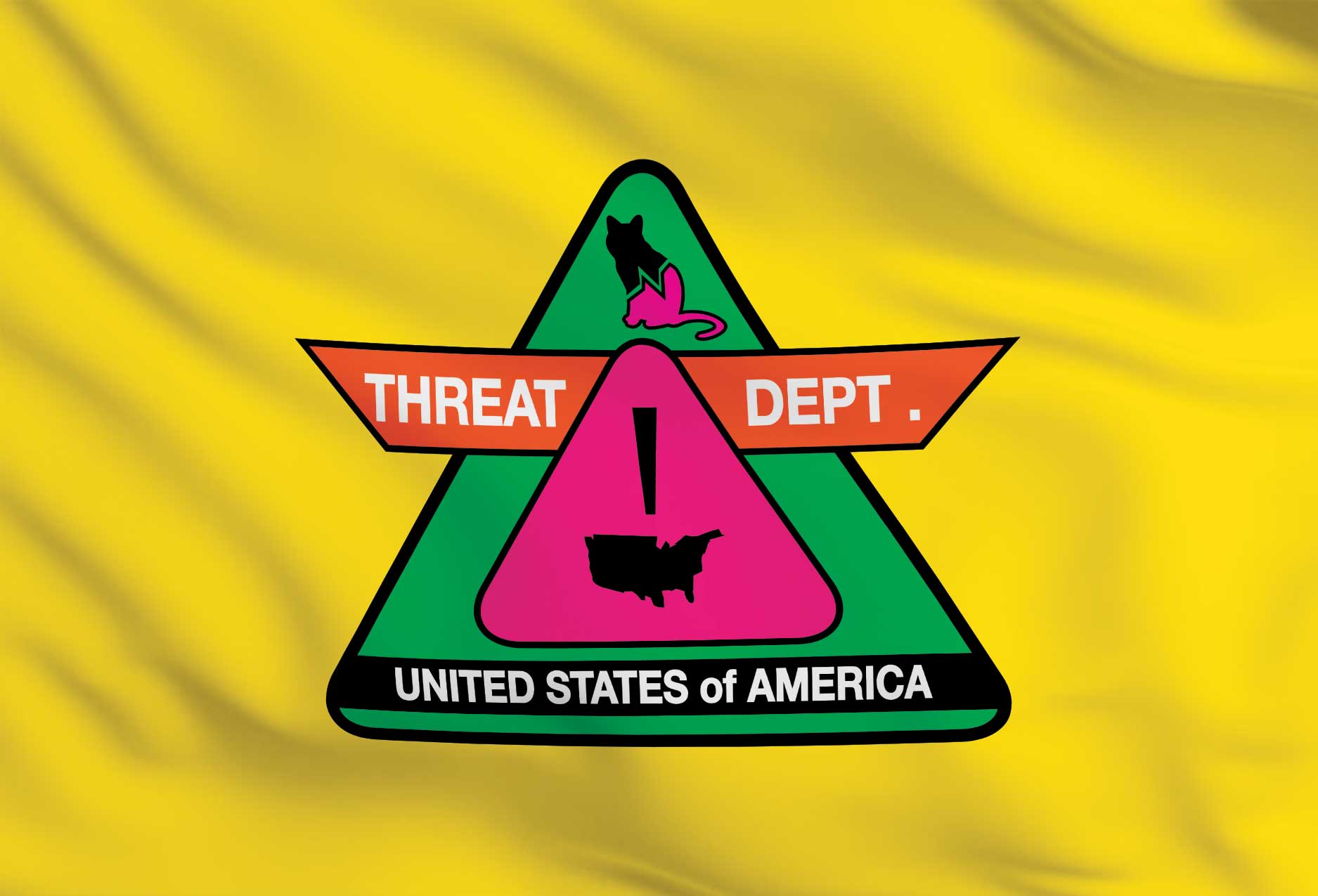 The United States Threat Department was conceived by President Trump's advisor Steven Miller and former strategist Steve Bannon. The two wanted to synthesize their histories of promoting intimidation and controversial beliefs into a mainstream and visible department that can more effectively carry out Trump's propaganda agenda. It was created by a special session of congress in 2017 in order to secure enough votes to pass.

The logo was designed by German semiologist Cameron Cameron, who is well known for his design work for Siemens, Lockheed Martin, and Morton Thiokol. His most famous design, the Nickelodeon Splat, gained Cameron a Nobel Piece Prize (the graphic design version of the Nobel Peace Prize). He stated of the design for the Threat Department,

"I design a symbol that will stick in the back of the viewer's brain, an after-image, like when he looks into a bright light. When he is home with his lover, he will think of that strange emblem, it will nag at him, it will force a slight obsession, because he cannot remember every detail, and he cannot even remember where he saw it. I create a small religion for him, he craves to know what it means, what it looks like, and then I become a little god for him, I've controlled his curiosity."

—Cameron Cameron, from The Top Drawer

Cameron Cameron expounded on his obsession with using symbology as a means of controlling humanity. He paired up with Johns Hopkins University to conduct several now-controversial experiments which use subliminal messaging and prejudicial color-coding. Cameron's interest in color theory lead him to a new school of semiotics which abandons traditional color relationships (like patriotic red, white, and blue or Pan African green, yellow, and black) and embraces dynamic and electrifying color combinations that challenge the viewer. The Threat Department logo utilizes several of Cameron's principles, including shock palette, symbol hierarchy, and faith hinting.

THE DEPARTMENT OF EXCLUSION 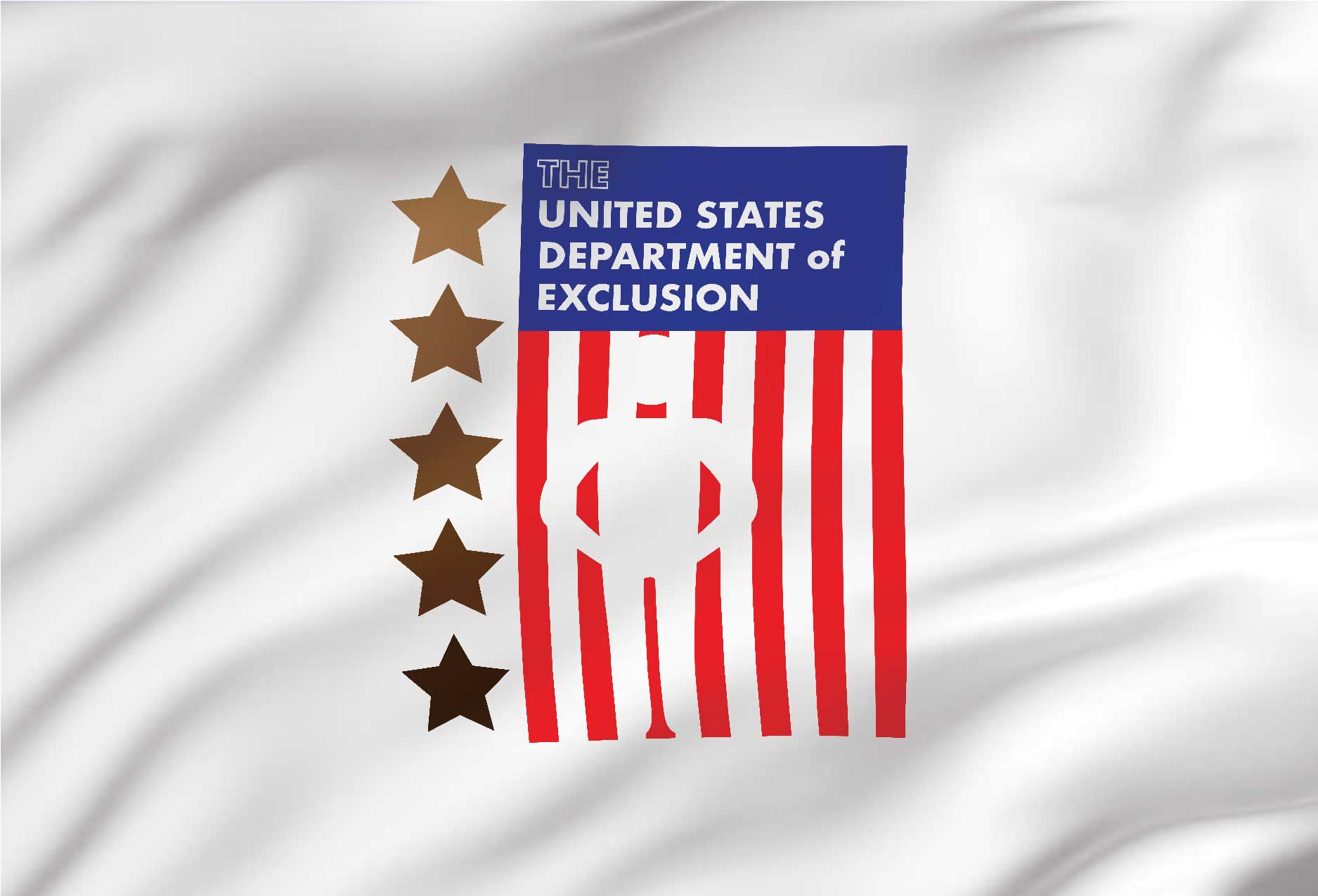 The Department of Exclusion officially replaced the Homeland Security and Interior Departments under the Turmp Administration. Its focus is on keeping the middle class white and Making America Great Again. When it is not deporting those whom do not belong, it is energetically advocating for marginalized white Americans. It became apparent to the Trump White House that he needed a strong message that would unite White America. His advisors crafted The Department of Exclusion in order to stem the increase in equality protests for people of color, immigrants, and foreigners in America.

The emblem was created by Republitex, a branding and lifestyle company that focuses on promoting and propagating Americana. The Republitex team put every speech President Trump has ever given into a computer program that logged common phrases, moods, and beliefs into a graph plotter. The design team then used President Trump's own words to create an emblem that most efficiently consolidated all of his thoughts into an easy and approachable graphic.

Sam Canby, the Republitex Design Chief described the program as a sort of "sausage machine" that turns the hours and hours of Donal Trump speaking into a concise product. He says that this was the only way the team could approach the project, as it was hard to pin down the beliefs of President Trump. In an interview with GQ, Canby stated,

"As an employee of Republitex I'm real limited on what I can say, not just to you, don't worry. But the project was handed to me and my team and we did it. Well, the computer did it, but we got paid for it."

Canby has refused to comment on the design and what it stands for, however president of the National Policy Institute and self-proclaimed "New Hitler" Richard Spenser said that the emblem is a perfect representation of American identity politics. He stated in an interview with Der Reichs Spiegel,

"I think it's obvious, just look at it, it doesn't take an educated person like me to explain it, trust me. I think it's a pretty clear design, but watch the fake news say I'm a racist. If I were more of an asshole, I'd say it should have a nice swastika on top, but that's just me."

The icon's controversial symbolism isn't lost on a tense nation, many have protested the symbol and the department it stands for in Inclusion Marches throughout 2017. The ACLU has claimed this to be the number one most burned flag in American history, and the angered population does not seem to be slowing down.

THE DEPARTMENT OF MASCULINE SECURITY 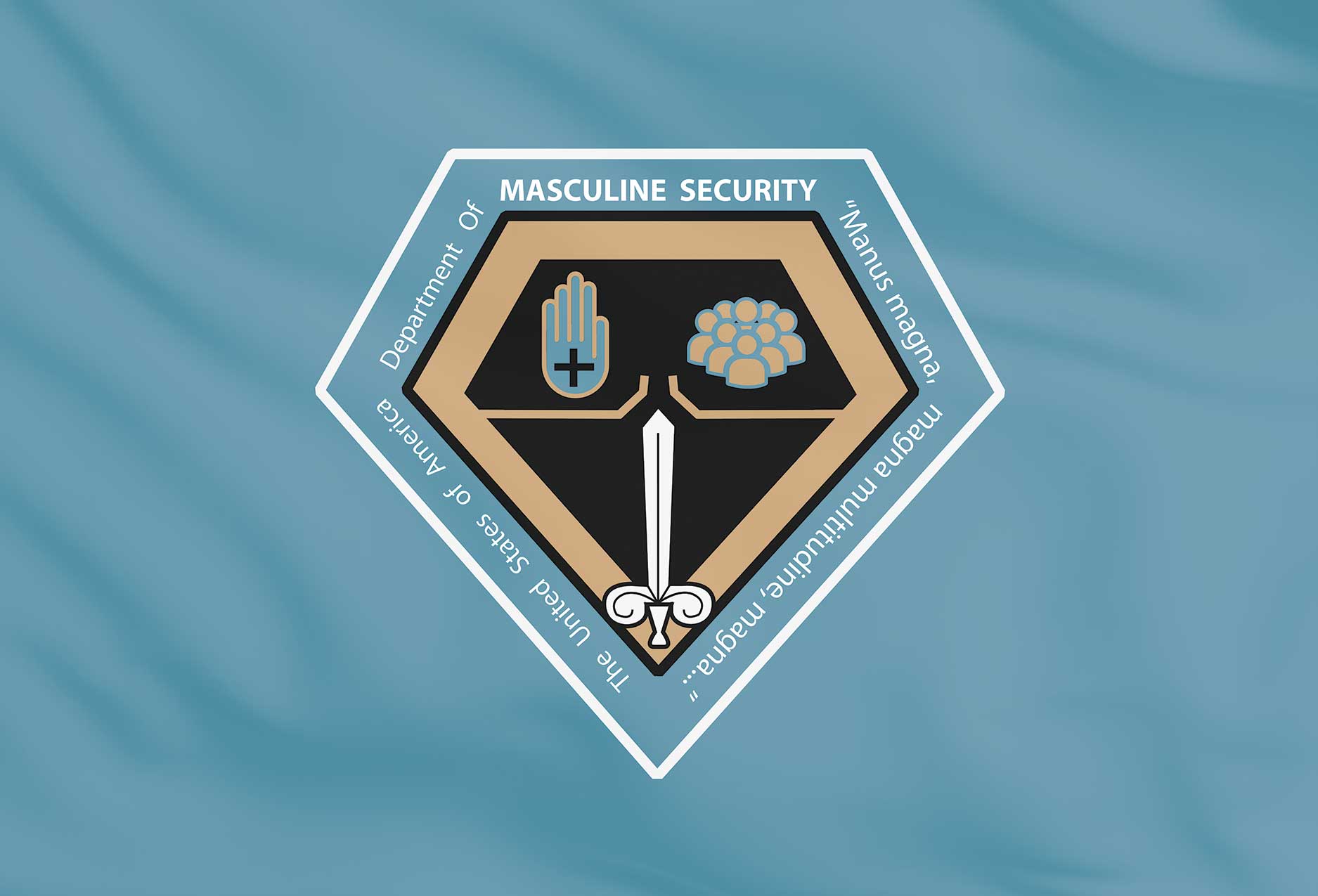 President Trump conceived of The Department of Masculine Security while campaigning against Hillary Clinton, he designed the logo on the back of a Kit-Kat wrapper on his private plane. He handed the sketch to Vice President Pence and said "we need to make this happen".